Scenes from the Road- Detroit

The View traveled to Detroit to take in the Predators last game at the Joe. Here are some scenes from the road: 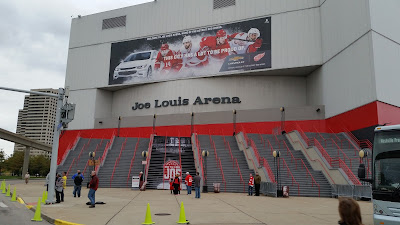 The iconic steps that lead up to the Joe. Both entrances have a lot of steps to contend with, and one has to go through a labyrinthine path to access the handicap entrances. 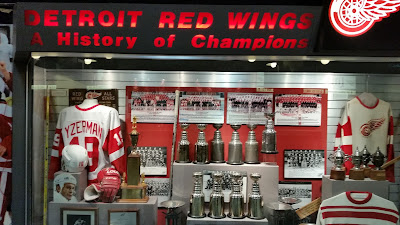 Once inside, there is a lot of history for the fans to take in. This is one of the displays on the main concourse of the arena. 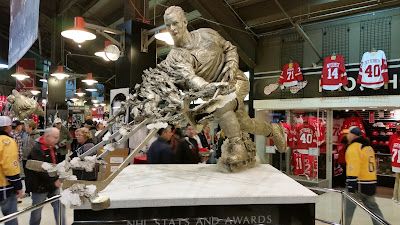 The impressive statue of the great Gordie Howe. This is a magnificent piece of art celebrating one of hockey's greatest players. 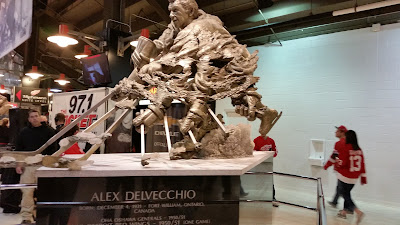 Another statue of a former Red Wing great, Alex Delvechhio. 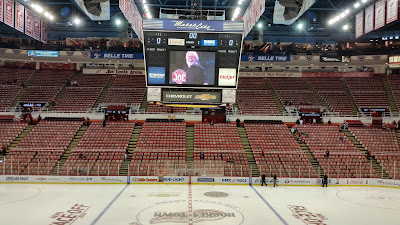 The Joe. Prior to the game, the scoreboard was running a tribute video to the history of the arena. Notice that Detroit native Bob Seger is on the screen. Many former players and artists that had appeared at the Joe gave their recollections of being in the arena. Very well done tribute. 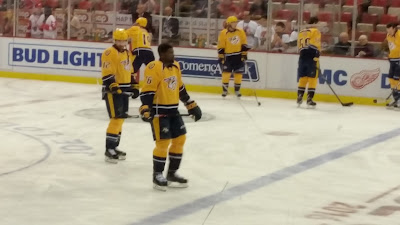 Surprisingly, there were a lot of signs from Wings fans giving some love to P.K. Subban. 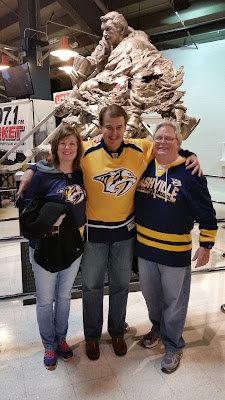 The View found lots of Preds fans in attendance at the game. Unfortunately, the game didn't turn out the way we wanted. 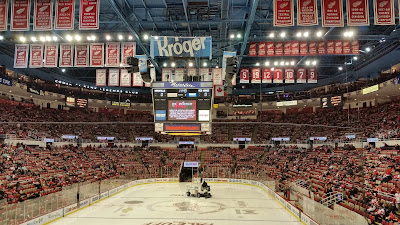 The view from our seats at the first intermission.  Would love to see that many banners hanging in the Bridge someday.

The Joe is a historic and storied hockey venue. She shows her age (38 years), but the history of this barn is phenomenal. The new Little Caesar's Arena is supposed to be spectacular and I can't watch to watch the Predators in that venue.

Little Caesar's Arena is not a name that  the locals seemed too enthused about, so I propose we call it "The Pizza Palace".

Lots of fantastic history in the Joe, and I hope that carry most of the artifacts over to the new place.
Posted by The View from 111 at 4:13 PM No comments:

Predators Don't Show Up, Drop Game 7 to the Sharks 5-0

The Nashville Predators have never won a playoff game on the home ice of the San Jose Sharks.

That unenviable trend continued in the 7th game of the Predators second round series against the Sharks.

The Sharks jumped on the Predators early in the game, out shooting the Predators 17-3 in the first period and tallying twice. Joe Pavelski scored on the power play and Joel Ward scored on a breakaway to make it 2-0 after 20 minutes.

Shea Weber had a brutal turnover to Logan Couture, who converted to make it 3-0 early in the second period.

Pekka Rinne was under siege, while Martin Jones had an easy night as the Predators offense never threatened through 2 periods, managing only 8 shots on goal.

Joe Thornton scored on the power play early in the third period to make it 4-0. Patrick Marleau added a goal to make it 5-0.

The Predators were out of gas and getting embarrassed.

Carter Hutton came in to finish the game in net for the Predators, which was just as well because the team in front of Rinne was getting him killed.

The Predators didn't bother to show up in what was arguably their most important game in franchise history and went down to an embarrassing defeat 5-0.

It is incredibly disappointing to see this team fall  flat on their face. It doesn't take away from the great run they had, but the frustration and sense of failure is palpable with this lack of effort.

I will have a post mortem on the season in a few days.


They are going to have to find a way to win these types of games and have players that will step up in these big games.

I am still proud of this team.

Lackluster and Lethargic, Predators Fall to the Sharks 5-1

After their 3 OT marathon, the Nashville Predators and the San Jose Sharks were at it again, this time at the SAP Center. The teams entered game 5 tied at 2 games apiece and both squads looking to play through fatigue and trying to solve the others stellar netminder.

Patrick Marleau gave the Sharks a 1-0 lead, sliding a pass under the stick of Mattias Ekholm and under the pad of Pekka Rinne.

The Predators tied the game after Marleau's goal as the line of Mike Fisher, James Neal, and Colin Wilson continued their torrid play. Fisher was the beneficiary of a fine play by Neal and he poked  a shot by Martin Jones.

The Predators left Joe Pavelski alone in the slot and he beat Rinne with a blistering wrister to make it 2-1 heading into the intermission.

A horrible line change and defensive breakdown sent Logan Couture in alone and he beat Rinne to make it 3-1 early in the second period.

Joe Pavelski scored on the power play to make it 4-1.

Melker Karlsson made it 5-1 when he scored in the final minute against Carter Hutton, who had come in for Rinne.

With a chance to put the Sharks at a huge disadvantage, the Predators showed no fire, no will, no heart.

Now they have to turn it around and face a must win back at Bridgestone Arena.

Let's hope they have their hearts in it.

Predators Bite Back, Defeat the Sharks 4-1

With their backs against the wall and down 2-0, the Nashville Predators needed an attacking, aggressive game to get back into their series with the San Jose Sharks.

The Predators attacked all night and defeated the Sharks 4-1 to cut the Sharks series lead to 2-1.

After a fluky goal by Patrick Marleau, a play in which both Shea Weber and Pekka Rinne misplayed the puck, the Predators scored 4 consecutive goals to secure the win.

And the Predators power play finally woke up, with 2 of those tallies coming with the man advantage.

James Neal opened the scoring with the Predators on the power play with a snipe from below the face off circle that beat Martin Jones high glove side.

Shea Weber made it 2-1 with a howitzer from the slot that Jones is still trying to find.

Up 2-1 going into the third period, the Predators couldn't sit bakc and let the Sharks take the play to them.

The Predators didn't turtle, instead forcing the play in the Sharks zone.

Colin Wilson banked a puck off the back of Jones to make it 3-1.

Filip Forsberg finished the scoring with a power play goal for the final margin of 4-1.

This was undoubtedly a confidence building win for the Predators. They have seen that when they attack and use their speed, the Sharks have difficulty handling the attack.

Now they have to do the same thing again on Thursday.

Predatoes Have Their Chances But Can't Finish, Fall to the Sharks 3-2

The Nashville Predators looked to steal home ice  at the Shark Tank the second game of their series with the San Jose Sharks. The Predators are going to need a full 60 minutes of play and contributions from the top lines to accomplish that task, something that didn't happen in game one.

The Predators played a full 60 minutes with jump and energy this game. Unfortunately, they still came out on the short end of the score by a 3-2 margin.

The Sharks lethal power play capitalized in the second period as Logan Couture tallied to make it 1-0. Pekka Rinne made the initial save, but Couture was left all alone to pick up the rebound and pot a goal into a near empty net.

In the third period, Mattias Ekholm launched a shot through traffic that beat Martin Jones top shelf to tie the game at 1.

Joe Pavelski broke the tie as he was alone to gather in a rebound to make it 2-1.

Joe Thornton hit an empty net goal to make it 3-1.

Roman Josi scored with 3 seconds left to make it 3-2, but there was not enough time for the Predators to tie the game and they will return home down 2-0 in the series.

The onus is on the Predators to capture the next two games at Bridgestone Arena. They are going to have to come out with the jump and energy that they displayed tonight.

And they are going to have to finish some of their chances.

Predators Wilt In the Third Period, Fall to Sharks 5-2

The Nashville Predators looked to continue their road success in the playoffs with a second round match up against the San Jose Sharks at the SAP Center. The Predators won 3 of 4 meetings against the Ducks at the Honda Center and were attempting to build on that momentum.

A scoreless first period saw both teams probe but neither would find the back of the net.

That would change in the second period as Mike Fisher sent the Predators into the second intermission with a power play goal.

The Predators seemed content to sit back and lost their attacking mode, and it cost them. They gave up power play goal to Tomas Hertl and Logan Couture, which were sandwiched around an even strength goal from Joel Ward.

The Predators pulled Rinne for the extra attacker and a Roman Josi shot deflected off Ryan Johansen to make it 3-2 with 1:49 remaining in the game.

Any hopes of a comeback were dashed by an empty net goals by Couture  and Tommy Wingels to make it 5-2.

The Predators were in this game, and in fact controlled this game until they decided they could sit back and hope Rinne would be able to hold them off. Letting the Sharks attack and pour shots on the Predators net was not going to succeed.

That style of play didn't work in the regular season. It certainly isn't going to work now.

This team can win this round. They have the talent to do so.

But they will not win if they continue to be passive.

Predators Step On the Ducks 2-1, Advance to the Second Round

The Nashville Predators were going into the hostile environment of the Honda Center to play their first game 7 in their history. The Anaheim Ducks were trying to exorcise their recent failures in a game 7 match up.

And the Predators are making history.

The Ducks are still trying to exorcise those Game 7 demons.

The Predators came out strong with two first period goals by Colin Wilson and Paul Gaustad to take a 2-0 lead going into the first intermission.

The Predators spent the next 40 minutes absorbing the frantic push by the Ducks. They gave up a power play goal to Ryan Kessler early in the third period to exponentially increase the pucker factor for Pred nation.

Frederick Andersen was outstanding after giving up the first period goals. As good as Andersen was, Pekka Rinne was even better.

No, Rinne was absolutely outstanding.

He was under assault throughout the game, especially in the final 40 minutes. And the big Finn was up to the task. He made some outstanding saves, got some help from a crossbar, and from his D that cleared the puck out of danger.

That effort secured a 2-1 win and a second round match up with the San Jose Sharks.

What a character win and comeback by the Predators! After losing 3 straight and being given up for dead, the Predators roared back to life and captured the series.

It was a long, tough series. Yet it is a series win that should really boost the confidence of the Predators.

Bask in it, Pred Nation.

The View from 111
A native Nashvillian that loves the Predators and hockey. A humble blogger that shares his views on hockey, sports, and life.